Below are pictures of Randy's big wins for both AKC and CKCSC shows.

Randy's most recent pictures are at the bottom of the page.

In September of 2002, when Randy was just 4 months old, he went to his VERY FIRST dog show. He was too young to be in the official classes, so he was entered in the Puppy Fun Match that is held just after the official show. He did REALLY GREAT!!! The Fun Match is just like the official show except that wins don't count toward championship. Well I took Randy into his class and he did fantastic. He won his class and also won Best Of Breed. (But then I must admit that Randy was the only Cavalier entered in the Puppy Fun Match so he automatically got Best of Breed.) So then Randy had to go in the ring against ALL the other Best of Breed winners from all the other breeds of canines in the Toy Group (Little sized breeds of canines like shit-shus, miniature pinchers, etc.) It was a BIG group and the competition was VERY tough. Each dog is compared against its own Breed Standard. A Breed Standard is a written description of what the perfect dog of that breed would be like. The dog that comes closest to its own Breed Standard wins. The judge took a long time to make up her mind. (The winner of each Group (Toy, Sporting, Terrier, etc) gets to compete for the coveted Best In Show.) Well, Randy was behaving sooooo great, especially for a VERY young little puppy. The judge finally picked a beautiful Shit-shu for Best In Toy Group. Then she picked RANDY for SECOND PLACE! I was SOOOOOOOOOOO THRILLED!!!!!!!!!!! We got a GROUP SECOND!!!!!! This is an extremely IMPORTANT and BIG accomplishment for Randy, and even more so because it is his very FIRST show ever!!!!! 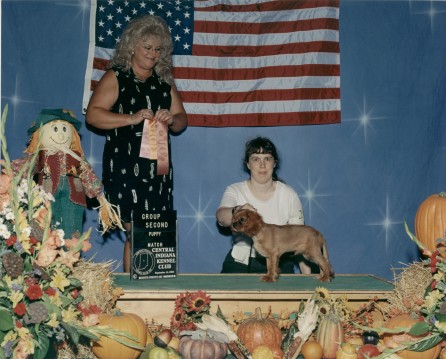 This is Randy with me and the Judge.

In January 2003 Randy went to his first CKCSC (Cavalier King Charles Spaniel Club) Show. Actually it is two shows back to back. Randy was entered in the show in the Junior Puppy Dog class on both Saturday and Sunday. There were eight dogs in the class both days. All were Blenheim (ruby and white color) except for Randy. I was extremely proud of how well Randy did in the ring both days! He was VERY happy to be there and he showed it. He stacked proudly, even puffing his chest out, and his tail was in constant motion! He didn't win anything on Saturday. Sunday however... HE WON A THIRD PLACE!!! Several people commented on how nice he is, and on Sunday one person commented that the only one in the ring more "sparkly" than me was Randy! I was pretty excited about placing in a CKCSC show and so we got our picture taken. 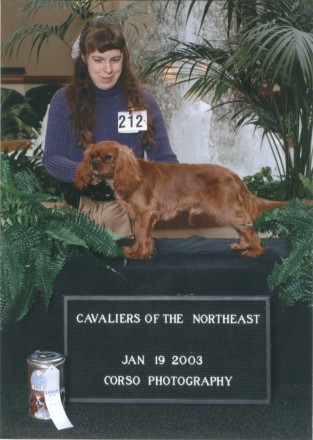 This is Randy and I. Wow, he is growing into one BEAUTIFUL boy!!!

(But don't tell him I said so, because he is conceited enough and he already tries to boss me around.) 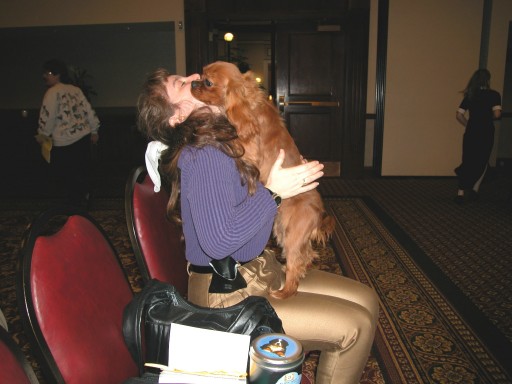 This is Randy trying to "smother" me.

I have no clue why he does this, but sometimes Randy tries to lay on my face covering my nose and mouth. Maybe he just doesn't understand that I can't breath when he does that. Anyway, it does make a cute picture.

In February 2003, Randy went to his first official AKC show and won his first point toward his Championship. 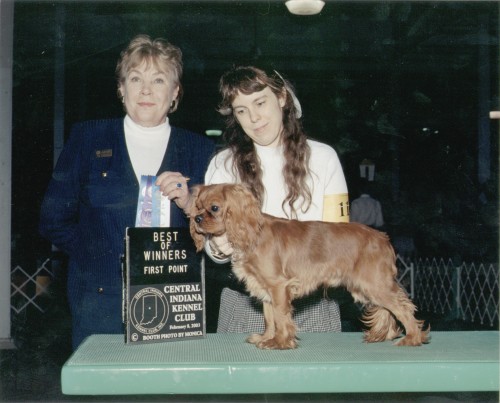 Randy with me and the judge.

In July 2003, Randy went to his second CKCSC (Cavalier King Charles Spaniel Club) Show. Actually it is two shows back to back. Randy was entered in the show in the Graduate Puppy Dog class on both Saturday and Sunday. There were ten dogs in the class both days. All were Blenheim (ruby and white color) except for Randy.

On Saturday Randy won FIRST place in his class!!! I was soooo excited I was shaking all over!!! Randy beat enough other dogs to earn TWO POINTS toward a CKCSC Championship!!! 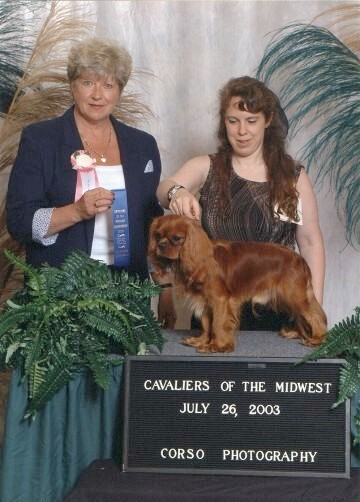 This is Randy with me and the judge.

The on Sunday, Randy placed again. This time wining a Third Place in his class. 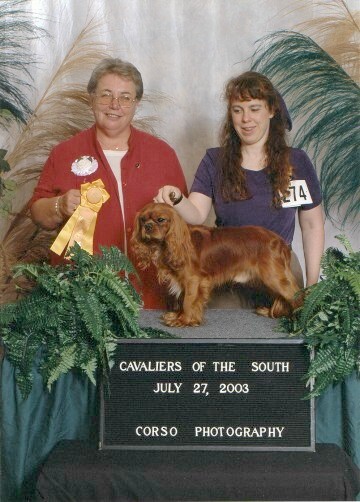 This is Randy with me and the judge.

In January 2004, at the Cavalier King Charles Spaniel Club (CKCSC) Show in Columbus, OH Randy got a Third Place win on Saturday and a First Place win on Sunday. The First Place earned him 2 more points (for a total of 4 points now) toward his CKCSC Championship. 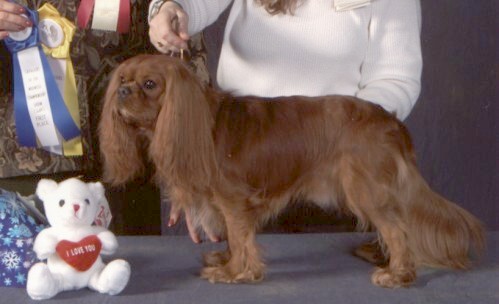 Randy's close-up with the "Love You Bear" that he won. 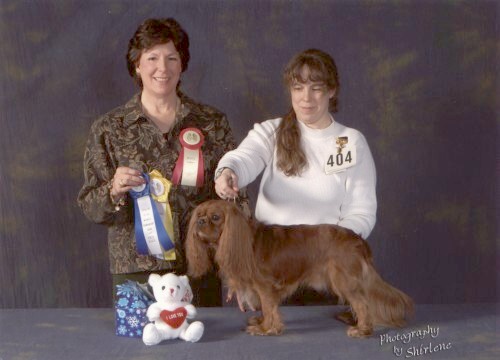 Wow was that a great weekend for Randy or what!! I can hardly wait to see how he does as he gets older.

In July 2004, at the Cavalier King Charles Spaniel Club (CKCSC) Show in Indianapolis, IN Randy got a Second Place win on Sunday. 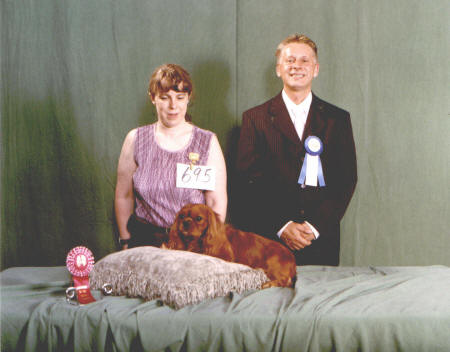 Randy is consistently placing at the CKCSC specialty shows and we keep hearing how difficult that is to do!

Randy's next show was the Lebanon AKC show in September 2004. Randy earned another point toward his AKC championship. That makes a total of two points now. Kody was also entered in this show but he did not win anything. 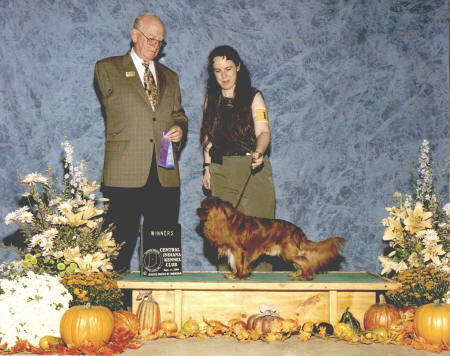 Randy's next show was the Indianapolis AKC Show just two weeks later. Randy won Best of Breed and earned yet another point toward his AKC championship. He now has three points. Both Randy and Kody were entered in this show too and this time Kody came in second only to Randy with Reserve Winners Dog. 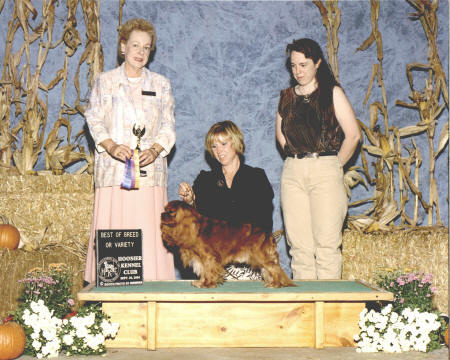 Randy with the Judge, his handler (Roxanne) and me.

In January 2005, at the Cavalier King Charles Spaniel Club (CKCSC) Show in Columbus, OH Randy got a Second Place win on Sunday. 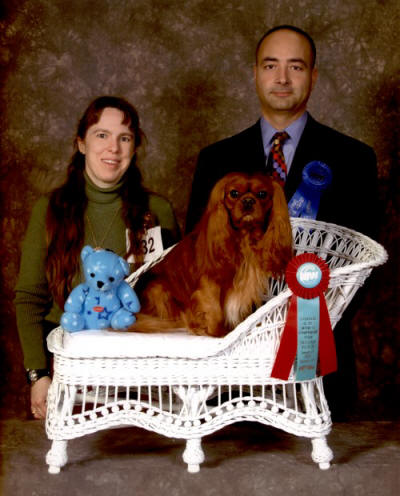 This is Randy with me and the Judge.

Randy's next show was in March 2005 in Kentucky. It was a very big 4 day AKC show with some tough competition. Randy did very well and won Reserve Winners Dog on both of the 2 toughest days - Saturday and Sunday. He did not win any points, so I did not get a picture. But we are all proud of how well he did.

In April of 2005 was a 4 day AKC show in Terre Haute, Indiana. On that Friday, Randy won Best of Winners and earned 2 more points toward his AKC championship. 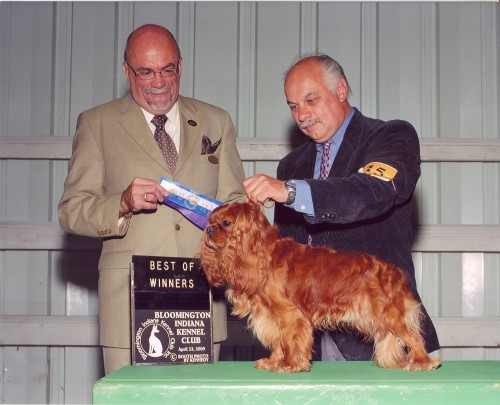 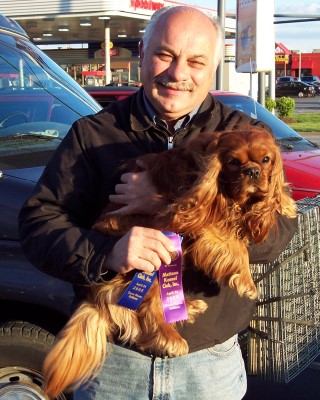 This is Randy with his handler Johann after he won his sixth AKC point.

On June 11th, 2005 Randy won a FIVE POINT MAJOR at the Canton, Ohio AKC Show. I was sooo excited when Randy's handlers (Roxanne and Johann) called to tell me that I screamed Whooooo Hoooo in Roxanne's ear! 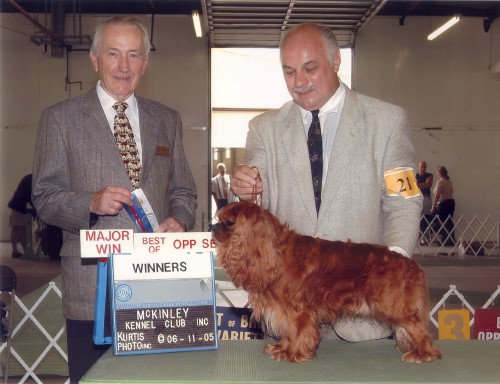 Randy now has 11 points toward his AKC Championship! He is almost there!!

On June 24, 2005  in Cambridge, Minnesota, Randy won ANOTHER FIVE POINT MAJOR and his AKC CHAMPIONSHIP!!! 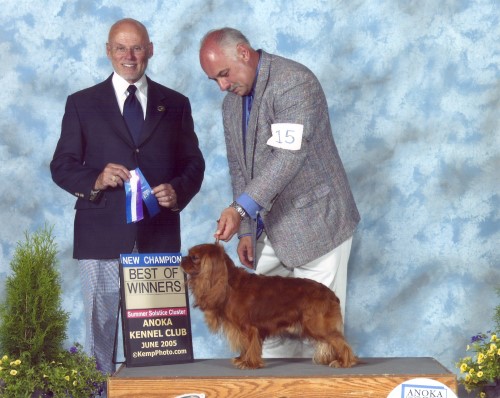 Randy is now an AKC Champion!!!

Randy is still working on his CKCSC Championship, so keep checking back here for the latest.

Randy's next show was the Indianapolis CKCSC specialty show on July 23 and 24, 2005. He is continuing to prove himself by both consistently placing and by winning against the Blenheim and Tri color cavaliers. We keep hearing these things are very difficult to do. Randy won 2nd place in his class on Saturday and again on Sunday. 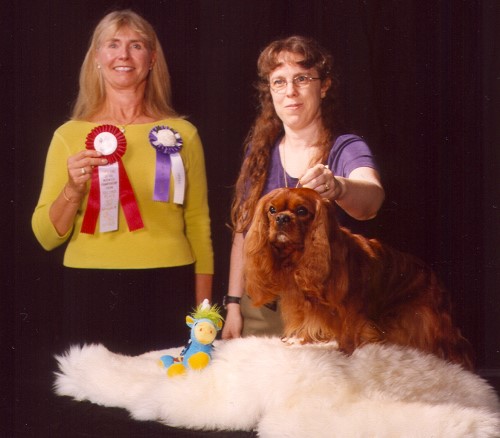 This is Randy with me and the Judge after Randy's second place class win on Saturday. 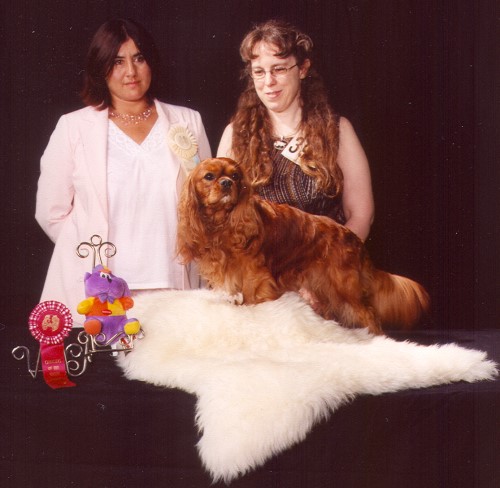 This is Randy with me and the Judge after his second place class win on Sunday.

On the evening of October 11th, 2005, Randy became a DADDY! He is now the proud father of three little fur-children. Firstborn was a Ruby boy just like him. Second was a Black and tan boy, and third was a Ruby girl. All three are healthy and happy.

Randy's pedigree can be found at Randy.

Randy's next show was the CKCSC show in St Louis, Missouri on January 21 and 22, 2006. He won third place in his class on both Saturday and Sunday. For Randy and I the highlight of the show however was getting to have a picture taken of Randy with two of his children who will soon both be beginning their show careers. I am especially excited about the futures of both these little packages of dynamite.

Randy with Ginger and Wilder. (Ginger is the one in the middle and Wilder is on the right.)

Randy's next show was in March 2006 in Kentucky. It was the annual CKCSC National Show. It was a very big 2 day CKCSC show with some tough competition. I even met some other exhibiters from England and Australia! Randy did really good but did not win anything on Saturday. On Sunday, he was extremely ticked at me during his class and so refused to move correctly throughout the whole class. The judge really liked him and kept looking at him like she wanted to place him but was disappointed because he was not moving right. Then later that day when we went in for the Best Ruby competition, Randy was over being mad at me and came extremely close to winning. The judge stood right in front of Randy looking from him to another Ruby near the back of the line. She kept looking back and forth for what seemed like forever. Then she finally decided to give the win to the other cavalier. I was thrilled as well as disappointed to come so close to winning Best Ruby. We'll win it next time though! Randy did not win any points, so I did not get a picture. But we are all proud of how well he did. However, the show still held a very proud moment for Randy and I when his son Cotillion Some Like It Hot (Wilder) won a second place in his class on Sunday in a very large puppy class. Read about Wilder's win on Randy's First Litter - Page 2. 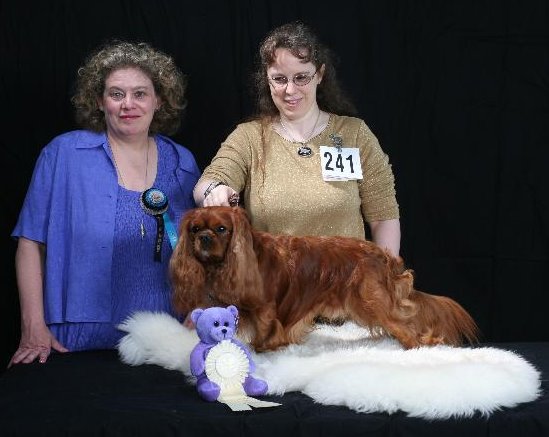 This is Randy with me and the Judge after his fourth place class win on Sunday.

We recently received some very sad news. Just after Randy returned from siring his second litter, Randy was diagnosed with a heart murmur near the end of September 2006 at age 4 1/2. Unfortunately, MVD (Mitral Valve Disease) is very common among Cavaliers and leads to a very early death for many of our beloved Cavaliers. For more info see www.cavalierhealth.org, www.premiercavalierinfosite.com, and www.ckcsc.org. Also note that since Randy's murmur was diagnosed before age 5, Randy will no longer be available for stud and none of Randy's kids should be used for breeding unless that kid reaches the age of 5 and is still heart clear.  - SEE HEALTH UPDATE BELOW (A Welcome Bit of Good News)

In August 2007, I received some very welcome good news! Randy had his 1 year follow up with the canine cardiologist ... (read the rest at the link below)

Go directly to read my good news at A Welcome Bit of Good News!